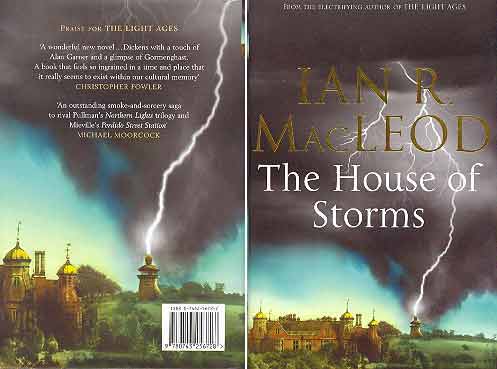 HOUSE OF STORMS [THE]

Hardcover UK, first printing and true first edition. (The first US edition was published later by Ace in May 2005.) First Printing with "1" present in complete number line. Very fine (unread) copy in very fine jacket. Not a book club, remainder or ex-library copy. Sequel to The Light Ages. (The US edition of Light Ages was published May 6, 2003 and precedes the UK edition, published June 2, 2003. However the UK edition features the outstanding jacket illustration by Edward Miller.) Alternate history where magic triumphed over science in the 17th century. House of Storms takes place one hundred years after the events in Light Ages. "The House of Storms is that uncommon thing, a sequel to be treasured as much as its precursor." - Nick Gevers, Locus, February 2005. "This is a major work by a master writing at the top of his form." - Publisher's Weekly. Ian Macleod is also the author of The Great Wheel (1997) which won the 1998 Locus Poll Award for Best First Novel. Fine full color, wrap-around jacket illustration by Larry Rostant.

Title: HOUSE OF STORMS [THE]

HOUSE OF STORMS [THE]